Catch of the Day- Lobster and Conch

It was a calm day with no wind and no waves, so we ventured in our dinghy out to the reefs of Great Guana Cay with our spear and snorkeling gear.  It took us a while to spot any lobster, and when we did, even longer to catch them.  But with a little bit of practice and teamwork we caught four.  They are super-fast and the first few slipped from our grasp!

Our catch was four big lobster and two beautiful conch.  We were so excited!!  The lobster were not easy to catch but Amelia used a spear to trap them and then Grant grabbed them from the the bottom.  A lot were pretty curious and made it easy for us by coming out of their rock ledges quite a bit.  Amelia tried a few times to strike them, half-drowning under water, and after a few attempts quickly got the hang of it and was able to predict their reactions better.  Grant was always there to quickly grab their sharp bodies with his gloves and throw them in our mesh bag. 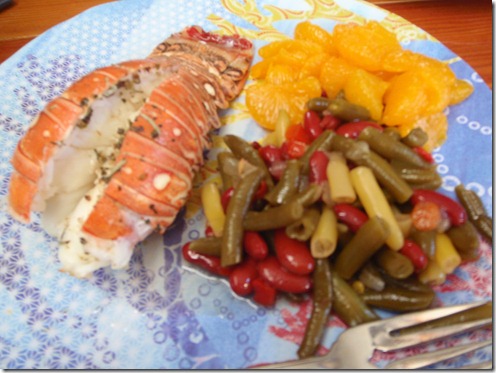 We cut the tails lengthwise and added butter, salt, pepper, oregano and basil.  We decided to grill them and they were delicious.

The meat came right out of the tails and Grant devoured his!

The conch were easy to catch– they move at a snails pace.  The trick is finding them, and we finally did! Amelia always feels bad for the conch because she likes quirky creatures and these have little eyes.  It’s the eyes looking up at you that make it hard!!!  Anyways, Amelia opened the first conch by using a hammer and chisel to puncture its shell near the top.  (There is a precise spot but it is hard to describe).

Then, you jab a knife in the punctured shell and basically cut the muscle the conch is using to hold itself in the shell. Amelia’s came out pretty easily.

Grant’s conch put up a good fight but Grant won in the end.  After getting the conch out you cut away their brown skin and insides until you are left with the hard white meat.  To get the brown skin off we used a sharp knife, but some people like to “bark” it by using their teeth to peel the skin off.  (Seriously I am not making it up).  We used a hammer to gently tenderize it a little and then cut it into small pieces for conch fritters.

The batter for the conch fritters includes 3/4 c. flour, 1 1/2 tsp. baking powder, 1 1/2 tsp. Old Bay (would add more next time), 2 beaten eggs, 1/2 c. milk, vegetable oil for frying and some powdered sugar to drizzle on top.  I also added some green pepper bits and onion, you could also add corn or another vegetable. 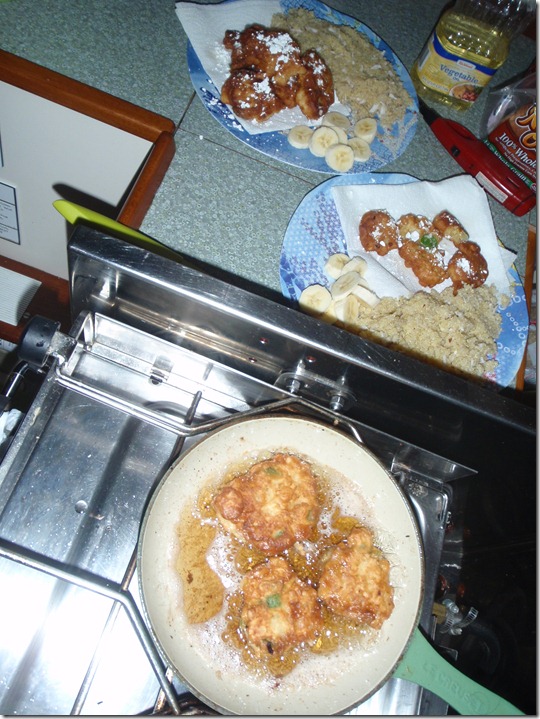 Then, fry them in oil, turning, until done.  It was like cooking a pancake, when I saw the little bubbles in the batter it was time to flip it.  Very filling!  It made a little too much for two people. After many days of hunting, searching, and close calls, we finally lucked out and had two days of feasting!