But we’re not going for speed.  In a little less than 24 hours nonstop we transited from Georgetown, Exumas 99 miles to Green Cay, a small island in the middle of nowhere.  After a few hours on the beach and snorkeling we continued 28 miles to the South Bight of Andros island. 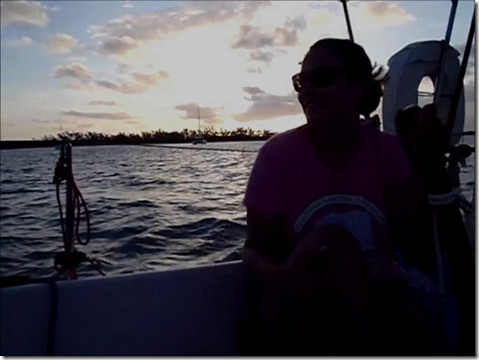 We departed Georgetown at 0715 after listening to the weather report on our SSB receiver.  The wind was still blowing a steady 15 knots from the SE, but it was the first weather window we’d seen in weeks.  And it was forecasted even lighter over the following days.  We headed out of the harbor with four large catamarans and one monohull.

Our route was conservative:  Travel 15 miles offshore (3 hours) from Georgetown, Exumas to Square Cay Cut and then stay in the protected waters inside the banks and “south-side” Barreterre of the Exumas.  This led us through some shallow areas on our chart, but it was high tide and we never saw less than 6 feet.

One “shallow” area on the chart through Pudding Cut by Brigantine Cays was actually 12 ft deep and we passed a local cargo ship using the route.  Inside the banks the weather was much calmer.   It was less physically exhausting to have Velocir’s motion decreased.

Still too much motion to sleep through.  We took 3 hour watches and used the NAVIK windvane to steer the entire way (except the shallows of Pudding Cut).  This gave us the ability to adjust sails, do navigation and get snacks down below without calling up one another for help. 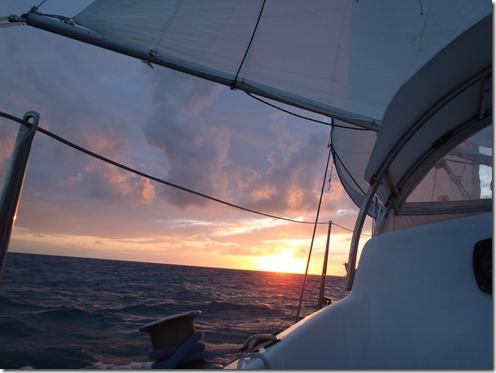 We sailed through the night, using jack-lines (heavy duty webbing that runs around the deck) clipped in to our harnesses and life jackets for safety.  At 0537 the next day we arrived at Green Cay.  The westward anchorage (protected from the weather) is navigable at dark with no hazards according to the chart.  We had never seen it ourselves though, so we were hoping it was as good as it seemed.  Using our spotlight at night, Grant stood on the bow and did a peripheral search on our way in.  Amelia watched the GPS and depth sounder to make sure they matched up.  Everything seemed right so we dropped the anchor and went to sleep.

The next morning we awoke to a little more swell coming around the island and tossing Velocir about.  Velocir was anchored in a fine spot- the GPS, paper charts, depth sounder and spotlight had served us well.  We got the dinghy, Raptor, in the water and headed over to the island to explore.

Ashore, the only signs of life were some goats making sounds in the distance.  We walked the rocky beach and then went snorkeling.

There were yellow sea fans called “Venus Sea Fan” that we had not seen before and many many fish.

After about 20 minutes in the water, Amelia looked out into the deeper water and spotted a reef shark swimming towards her.  Grant was about 20 feet away so she yelled to him and swam towards the dinghy (which was close-by).  The shark was curious about Grant and got within 15 feet of him, so Grant waved his spear at it, and it started to swim away.  That was a clear wrap-up to snorkeling, so we hauled up the anchor and set our course for the South Bight of Andros Island (29 miles).

Andros is three islands with large rivers running through them.  It has one of the largest barrier reefs in the world (good fishing!) and bone fishing in the bights.  It also runs along the Tongue of the Ocean, where just outside the reef there is literally a wall that plunges down thousands of feet, but inside the reef is very shallow.  This shallow wide-open landscape makes it only navigable in fair weather for cruising boats.  When entering South Bight, it was much larger and open to the weather than we realized.

Because of this ocean wall is so close to shore, Andros is home to AUTEC.  AUTEC is a US military establishment that had about four bases on the island (now only two).  As we have learned, they test submarines and sonar.  South Bight, our first stop in Andros is home to one of the abandoned sights.  It is located on Golding Island at the entrance to South Bight. 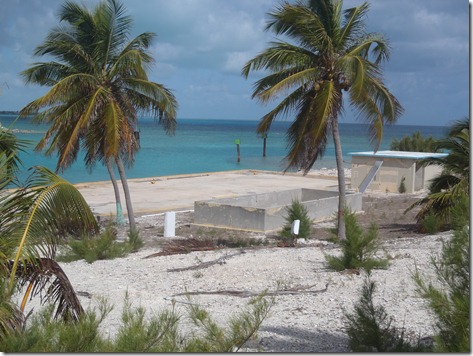 (Note to Cruisers:  (pictured above) There is an extremely well-marked deep water entrance to their deserted basin and concrete pier, protected from E-S.  We did not try it but would recommend and spoke with a former employee who said it would be a great spot.)

Now, the AUTEC site is home to sheep (that should be sheared) and the buildings have been gutted.  Such a large facility abandoned last year.  There were still horse shoes in the sand pit.

One item we saw was this sono-bouy.  According to its writing it contains a lithium battery and other chemicals.  We found a few of these on the island and have seen many washed up on beaches throughout our trip.  Nice to finally figure out what they are.

Next, we visited the small settlement of Driggs Hill.  It had seen better days.  We saw about four men walking around and three children playing outside.  There was a huge gas station and government dock with no activity.  Homes looked abandoned.  We didn’t linger.  (The three islands of Andros are not connected and the North side is more inhabited.)

After such a long journey we are very exhausted.  We didn’t catch any fish and are not anywhere protected enough to spend much time, so we will continue north up the island.

And, if this blog post isn’t long enough for you, here is a video about baking pizza on the boat: