Amelia’s parents reluctantly left the Bahamas and Amelia is off in cold Seattle visiting family. Well, cold for her, locals in t-shirts give her a double take when they see her bronzed face peaking out from underneath a wool hat. Grant and his brother Blake are now moseyin’ around the Sea of Abaco. The brothers bought their first boat together and sailed it around the chilly, windy waters of San Francisco Bay. This is an improvement.

Monday after they said goodbye to Amelia they sailed down in a nice and easy 10 knot easterly breeze to Tilloo Pond, a cozy anchorage surrounded by, well, nothing.

They stopped to check out a sunken barge, saw a big nurse shark and whole bunch of other fish. Just on the other side of the hills above is the Atlantic ocean and a weird moonscape of rock formations.

After bravely retreating from the very pointy rocks they did a little fishing trip to a nearby jetty. Several fish were chased, no lobster was found, but a couple good sized conch were gathered. Grant did, however, come nose to nose with a very curious young sea turtle. There was an incredible red to pink sunset that night.

The next day they had a 2 mile an hour spinnaker ride to their next anchorage at Snake Key. Despite some nearby construction, it was a beautiful spot. 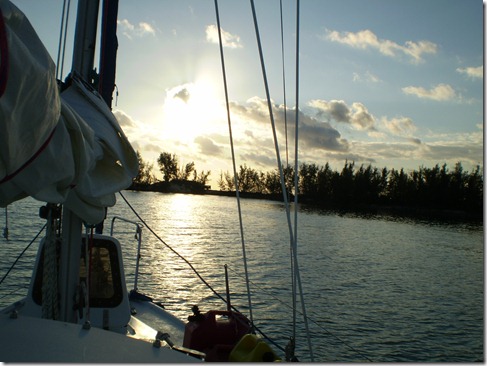 A nearby shallow area protected by islands made for a great dinghy adventure. There were a lot of young sea turtles zooming around in the shallow water, but only one fish was hooked and lost. The remnants of some sort of building, seen on the way over, turned out to be some sort of factory barge. Inside of the rust pile were two monstrous engines, 12 feet tall and 17 feet long each.

They each had what looked to be an 8 cylinder flathead engine for a starting motor and were just incredible.

Grant was especially interested in the 4 foot tall capstan on the front of it.

The next day up goes the anchor again as they set off for Man-O-War Cay. With a brisk wind out of the Southeast they worked their way around points and sandbars, sailing all the way to the harbor entrance.

They had a great lunch and walked around the island a bit and then bought a couple of lobster tails for $8 and had a wonderful dinner. So far, baked lobster is better than grilled lobster.

Today was a lazy day involving swimming around the boat, reading in the hammock, and going to shore to get lobster for dinner, again. The rain and 15 knots winds forecast for the day turned into a sunny flat calm. Sailing San Francisco Bay together was a lot of fun and made a lot of great memories, but its got nothing on this.