After resting for a couple of days whilst waiting out a lightning storm, Blake and Grant motored and sailed, as the wind allowed, to Spoil Cay off of Great Guana Cay near Baker’s Bay.  Sadly, there were no lobsters where there had been lobsters before.  Grant signaled to Blake, who jumped in and swam to him, whereupon Grant told Blake that he was signaling him to not jump in because there were no lobsters but there was an overly curious 4 ft bull shark.  Blake said we should really work out a better signaling system.

While on his way back to the boat, Grant speared a skate for use as fish bait.  Foreshadowing.

The next day, at their next anchorage not more than a couple miles from Spoil Cay, the brothers Howerton happened upon a den of lobster.  They speared four lobsters and saw many more.  And there was much rejoicing.

Grant decided the occasion was worthy of some of his coveted warm beer.

The brothers enjoyed their feast of baked beans, lobster with melted butter, and warm Maryland beer.

Their bellies still full of lobster, the boys threw out the genoa for an easy hour reach to Guana Cay harbor where they anchored in the lee of a tall rocky peninsula. 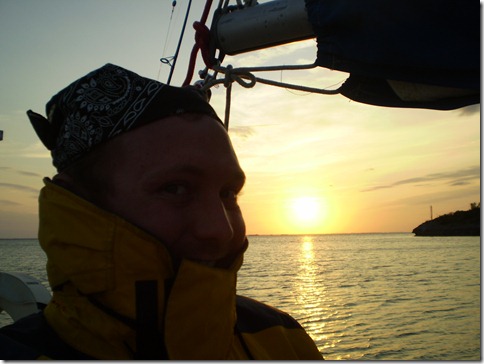 They sipped rum and enjoyed a picturesque Bahamian sunset. 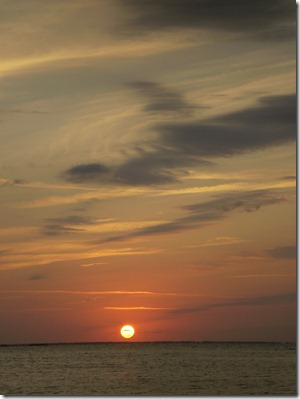 Later that night they paused their game of cribbage to go look at the stars when all of a sudden the quiet calm of the night was shattered by the whine of 150 lb. monofilament line peeling off the fishing reel.  Grant sprang into action and soon subdued the beast from the inky deep.  Blake administered a lethal gaffing to the jugular and thusly was their prey dispatched.  Grant filleted their catch, then the brothers asked the internet what kind of fish they were going to be eating the next several days.  The fish turned out to be a lesser amberjack, the biggest catch of the trip so far.

Who would have guessed that they would catch their fish after dinner, and on the evening before the Nipper’s Sunday Pig Roast (all you can eat); an event they had planned to attend all week. So they went to shore and got a huge bag of ice.

Nippers is the most famous beach bar in the Abacos and no visit to the area is complete without tasting one of their signature Frozen Nippers and/or attending a Sunday Pig Roast.

They had a great afternoon enjoying the view and eating more than they should have. On the way back to the boat they found a fresh coconut. 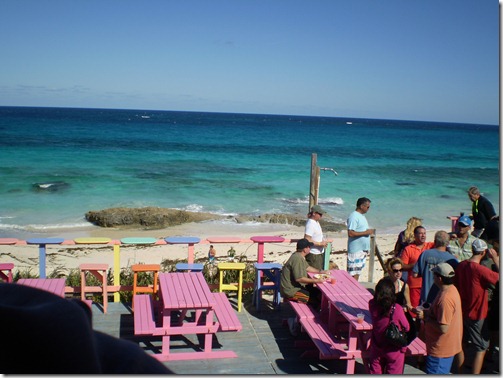 Not only is a coconut harder to get into than ever imagined, but the meat of a fresh one is delicious and a better movie snack than popcorn. 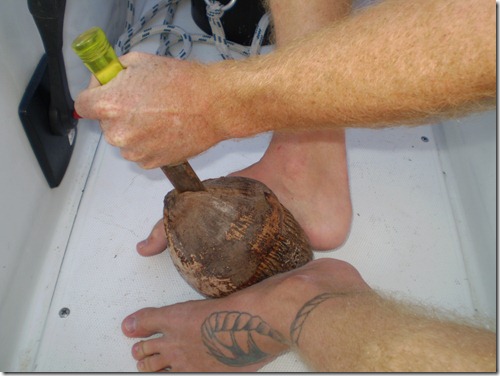 During the night, the wind picked up considerably and shifted more east, meaning the poorly placed rental boat that had arrived that afternoon was right on top of Velocir. To make a long story short, the rental boat drug their anchor onto Velocir just as Grant arrived from a trip to town. Blake and Grant scrambled up on deck and did their best to fend off the runaway boat while the rent-a-captain looked shocked and ineffectively tried to drop fenders between the boats.

Blake and Grant scrambled to get their engine on and ready as they thought the rental boat would snag their anchor. As they looked up the offender was setting sail and heading for Marsh Harbour. A nautical hit-and-run! Attempts to contact the boat via radio were ineffective. Fortunately there was no fatal damage, only a bitter taste in Grant’s mouth.

After the eventful morning, they sailed again for Man-O-War Cay to wait out a predicted storm.  While there was no thunder or lightning, the wind was up something fierce.  With reefed sails, the boys still made record time.  Even with a great anchorage, the boat rocked and wind howled all night.  Blake still feels like he is rocking even if he is on land.

Seeking refuge in the cabin, what else could they do but make some tasty amberjack burritos?

The next day they went to shore and wandered down the one golf cart street that runs that section of the cay. 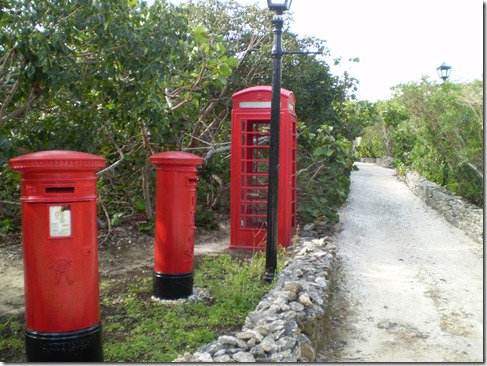 After more amberjack burritos, Blake and Grant set out under reefed sails.  They were on a reach in 25 knot winds for Marsh Harbour.  Grant was much more confident in the near gale conditions than Blake, who had not yet fully experienced the sailing prowess of Velocir.  Twenty minutes after this photo was taken two rain squalls came through.  Each time, the heavy rain silenced the wind and the boat rolled helplessly, waiting for the winds to fill the sails once again.

The weather became more moderate in the protection of Marsh Harbor.  Blake and Grant cleaned the boat and ate conch fritters at a nearby waterfront bar and grill.  Blake schemed on ways to not leave the Bahamas, and enjoyed Haitian rum and a Cuban cigar during his last Bahamian sunset as turtles swam around the boat.

One thought on “Moseyin’ Part Duex”