Not wanting any of our food to go to waste, I once again looked to my pumpkin recipe book for some guidance.  I have a pumpkin pie recipe I really love, but wanted to try the Pumpkin Cheesecake from the book so we found some cream cheese in Charleston after a massive search. (Note: in trendy cities “market” is code for overpriced sandwiches with wine, and “grocery” is code for cheap sandwiches with beer). 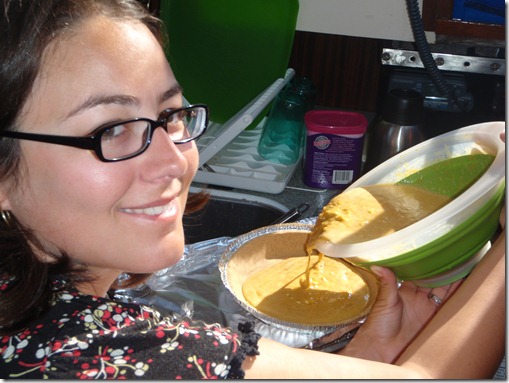 I guessed at two packages cream cheese but needed three.  I was also short one egg, had no rum and beat the egg whites as much as possible but they were only foamy, not stiff.  It wasn’t a problem in the end.

I just mixed everything I had together and baked it anyway!  Probably for the best health-wise to have less cream cheese.

It was super-delicious.  Next time I will smooth out the cream cheese more.  It was a little lumpy but I thought it would maybe even out when baking.  Not the case, but didn’t affect the taste.

This is a whole wheat bread and was very easy to make.  It is very good and I would recommend it for a breakfast food.  Also, luckily I have these nice baking pans that make it impossible for me to burn anything which I think is an important part of my baking coming out well sometimes.

Velocir is and Albin Vega 27 built in 1973.
View all posts by VELOCIR »
« Somewhere in the Swamps of South Carolina
Charleston: A Charming Old City »