We traversed the east coast of Andros another full day from South Bight to North Bight.  Still wide-open anchorages with no protection but nice beaches on-shore.  And still no fish!!

We kept going north, headed for the town of Fresh Creek.  Velocir started inside the reef, motoring up through the shallows now that the wind had shifted unfavorably.  We kept getting bites on our spoon lure but they escaped each time.  Grant reeled it in to see that the hook was so rusted and dull it had actually broken off on one side, so he replaced it with a new hook.

Before the inshore route got too shallow, Velocir headed outside the reef.  Here our other lure, a 6 inch green fish for Mahi Mahi, comes into play.  Just off Green Cay (a different one than we’d just visited) we got a bite!!

Grant struggled with all his strength to reel it in.  It was Amelia’s turn on the reel, but with the fight this Mahi was putting up she didn’t volunteer to trade jobs.  It took about 20 minutes of hard work to get the fish in.  As soon as it was alongside, Amelia gaffed it perfectly and brought it aboard.

It was a beautiful male Mahi Mahi.  You can tell because the head is more blunt than the female.

We entered Fresh Creek’s narrow channel a few hours later.  It is a larger town (comparatively) and has an old lighthouse, Androsia factory and beaches.  According to our chart, guidebooks and other blogs, there are three mooring balls in the harbor.  Anchoring is not possible due to the scoured bottom and very heavy current.

We went past the marina towards the mooring balls.  Two were taken by a trimaran that is permanently there.  The other one was free, so we slowly motored towards it….and ran aground.  It was low tide, so we would be okay.  But we were so tired from the past few days we worked as hard as we could to get unstuck.

After various tactics probably totaling 30 minutes, Grant jumped in the water and rotated Velocir 180 degrees.   He could see from the contour of the sand that if he moved Velocir about 5 inches over she would be free.  Amelia shifted the weight of the boat by moving forward and aft as Grant rotated the boat.  (Only possible on a boat Velocir’s size!)  He then grabbed the pulpit, pulling himself into the boat and shouted “go.”  Amelia knew he was now safely out of the water and put Velocir in gear.  We were free! (On the upside, we are now intimately familiar with our depth sounder’s readings.  3.3 is AGROUND.  3.5 is AFLOAT  Good to know….) 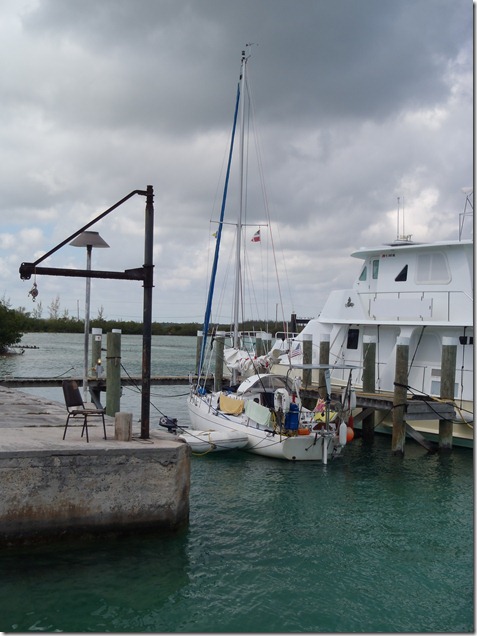 Between reeling in the fish and pushing Velocir off the sand, Grant was sore all over.  It was time to dish out some money for the only marina, Lighthouse Yacht Club- something we have only done one night our entire trip.  What a relief!  Protection from the sea, steps away from land, internet, showers and free ice.  Not a bargain, but not a choice.