Catch of the Day- Mahi Mahi!

The weather has really calmed down (finally!) so we decided to make our way south to Farmers Cay on the Ocean side, taking the opportunity to do some fishing.  We went into the town of Black Point and optimistically bought a bag of ice in case we caught fish (a deal at $3) and stopped by the grocery store one last time to find lettuce and some local tomatoes (also reasonably priced).  Produce!!!  So far so good!

We motored out the cut with some heavy current and made our course along the 80 foot ledge, that drops to about 150 feet—beyond that our depth sounder couldn’t tell us.  It was a nice calm day out.  As soon as we got out Amelia saw some fish activity in the water, we motored over but no luck.  Grant had two reels and a hand line out. A little while later he saw some activity in the water, we went over and a Mahi Mahi picked our nice reel that we had put 150 feet back!!!!!! 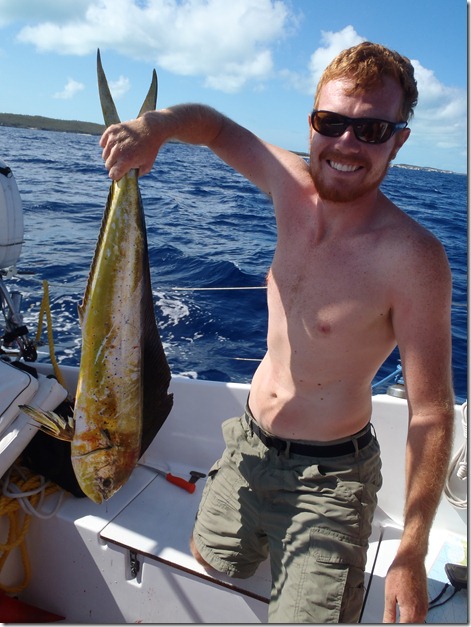 Compared to a Barracuda he didn’t put up much of a fight.  They are smart and he actually tried to swim towards and under the boat to escape.  Unfortunately that made him easier to reel in and Amelia just moved the tiller to make Velocir move every time he tried to swim under the hull. 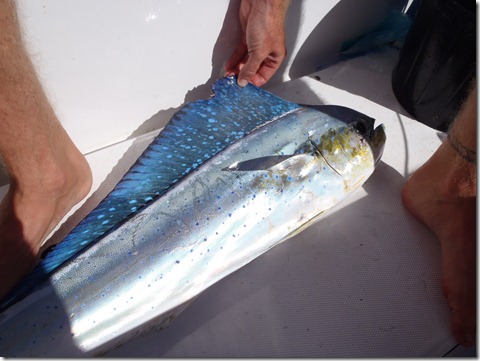 As soon as Mahi Mahi are caught, they turn from a brillant Green-Blue coloring to yellow, to green and finally grey.  It is very sad and beautiful!

Coming in the cut at Farmer’s Cay, we anchored next to a little sandy bay.  We went into town quickly before dark to see if there was any produce.  Nothing and no boat for at least a week.  We stopped by the local bar.   Everyone was watching Whitney Houston’s “private” funeral on CNN.  That is when we realized we have not seen or checked the news since we left Florida.  Even when we have internet we have not even thought to look.  As a news junkie, this was a big realization for Amelia.  We are changing little by little.  Life is slowing down. 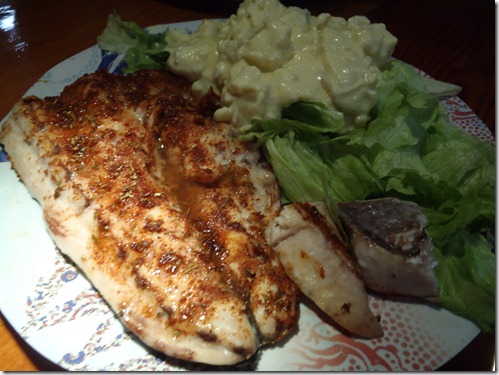 We thanked the fish a lot for being our dinner, and then baked him up with a seasoning Amelia’s mom made us.  It’s a combination of paprika/garlic powder/black pepper/onion powder/oregano/thyme and cayenne pepper and is especially good on swordfish.  Amelia also made Homemade Potato Salad, (http://allrecipes.com/recipe/worlds-best-potato-salad/) which was delicious.  Making it from scratch really forces you realize how unhealthy it is!!  Better than baked potatoes on a hot day though.  With the ice we bought, we’ll even be able to have cool potato salad tomorrow!!!  Cold food is a novelty.

Velocir is and Albin Vega 27 built in 1973.
View all posts by VELOCIR »
« Thunderball, Pigs, Iguanas- much to do!
Reaching Georgetown- A Cruiser’s Mecca »

2 thoughts on “Catch of the Day- Mahi Mahi!”