We’ve been cruising for one month and have made it from Annapolis, MD to Barefoot Landing, SC!  To celebrate, we are going out to dinner and staying at a marina for the first time!

Small not-really-but-kinda-rant about boating convoys:  Funny thing happened.  We passed a marina and noticed that there were four nice large sailboats that all looked similar with flags flying.  I said to Grant, “I bet they’re in a convoy, where they travel together as a group.”  Sure enough, a few hours later they had left the marina and were now passing us.  All from a small summer town in MD.  Now behind them, we hear on the radio channel 16 (for those that don’t know Ch 16 is a hailing and distress channel only, there are about 50 other channels for chatter”—Well, they say “Loose Folly Inlet”,  then a few minutes later “depth?”  We look at the chart.  We are coming up to that inlet.  Then seconds later “20”…..”depth?”  “14.”  and on it went.   EVERY BIRD SPOTTING WAS SHARED AMONG THE GROUP!  Jan especially was interested in the birds: “Heron and Egret to port! Heron with fish ahead”.  Well, not really interested in hearing about the egret a mile in front of us and irritated that I now know her name is Jan only because she’s talking on a distress channel for emergencies, I finally said “Please be advised CH 16 is for hailing and distress, please pick a party channel if you would like to share information about birds.”  It didn’t really help, but ugh, why?!?!?!  P.S. I’m sure they’re nice people.

Small rant about bridges:  The past few days we have gone through quite a few swing bridges.  We find that most of them are fine but a couple we have had irritating experiences with.  First,  RARELY do they ever respond to boaters requesting an opening.  The Figure Eight Island Swing Bridge told us when we requested a bridge opening at 11:28 (bridge opens on hour and half hour) that his clock read 11:34 and we were late.  I said “my watch must be slow.”  Then, 32 minutes later he promptly opened it for us and three other boats at 12:00 (our time).  Bridge tenders don’t open bridges 4 minutes early, so we had to wait a half hour in heavy current and drop our sails because he wouldn’t open it.  Also, while we waited he was hailed about the 12:00 bridge opening 6 times by different boaters and never responded to them.

Our other bad experience was today at Little River Swing Bridge.  We were in a line with two other boats we had all left the same anchorage with.  The first two boats went through but we were too far behind I think and he closed it on us, saying it would be a little while wait for the next bridge (this bridge opens on request).  As we were waiting, our engine started to overheat and we anchored in the channel next to the bridge. 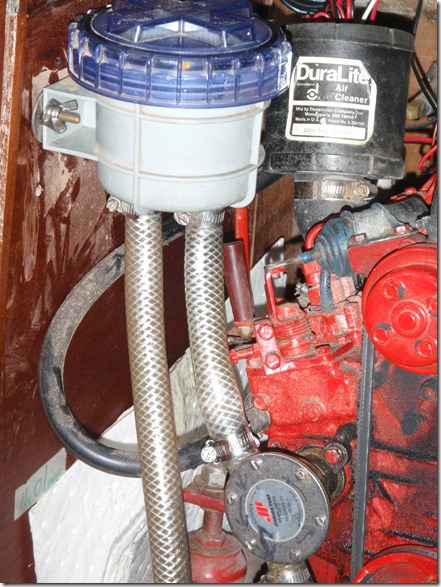 Our raw water pump got loose and shifted, kinking it’s hose.  This had caused the engine to overheat and we were getting low oil pressure.  About 20 minutes later a huge cruise ship came through (American Cruise Lines, like we are used to seeing in St. Michaels, MD).  Luckily, they could get by us, but I noticed the bridge was already open for them, waiting, even before the point where earlier the bridge closed because we were too far away.  When we finally got going again, we had to wait for the bridge.  While this (unlike the previous bridge) is somewhat understandable, still I feel like we are treated like second-class boaters!

The rest of the day to Barefoot Landing (a part of Myrtle Beach filled with restaurants and shopping) the scenery changed into interesting shrimping boats and less houses.  Without the the lines of houses with their break walls we could see more of the natural edges of the canal, which has turned from marsh to swamp.  Very beautiful, and we hope to anchor in a cypress swamp on our next stop.

Velocir is and Albin Vega 27 built in 1973.
View all posts by VELOCIR »
« Happy Halloween!
Somewhere in the Swamps of South Carolina »